What do you judge a beer on? This comes down to appearance, aroma, flavor, mouthfeel and strength. The following is a brief explanation of the elements. 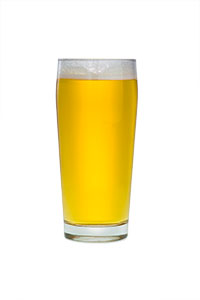 The visual characteristics that may be observed in a beer are color, clarity, and nature of the head. Color is usually imparted by the malts used, notably the adjunct malts added to darker beers, though other ingredients may contribute to the color of some styles such as fruit beers. Color intensity can be measured by systems such as EBC, SRM or Lovibond, but this information is rarely given to the public.

Many beers are transparent, but some beers, such as hefeweizen, may be cloudy due to the presence of yeast making them translucent. A third variety is the opaque or near-opaque color that exists with stouts, porters, schwarzbiers (black beer) and other deeply colored styles. Thickness and retention of the head and the lace it can leave on the glass, are also factors in a beer’s appearance.

The taste characteristics of a beer may come from the type and amount of malted and unmalted grains used, flavors imparted by the yeast (think Belgium), the types and quantity of hops used and special added ingredients (think Chocolate coffee porter). Even when a brewer works with just the old German formula of malted barley, hops, yeast (actually they did not know about yeast until the microscope was invented) and water it is surprising how many different styles of beer with unique flavors you can come up with.

International Bitterness Units scale, often abbreviated as IBU, is a scale for measuring the perceived bitterness of beer, with lower values being generally “less bitter” and higher values “more bitter”.

IBU stands for International Bittering Unit – the scale used to measure hop bitterness in beer. An IBU is one part per million of isohumulone, an acid derived from hops. If you like the very bitter “bite” of the “Extreme Beers,” a higher IBU would be an indication of that snap.

Some micro breweries are reshaping the IBU scale a bit. Because IBU only chemically measures the amount of one type of acid that come from the hops resin it can miss what is chemically chained to it.  So we are now finding some beer where they use high amounts of aromatic hopes rather then bittering hops will have a high IBU but can have almost no bitter taste. It is also the case that not all bitters are alike. The flavor of beers term with ESB or extra special bitters can have a quit a different taste from other bitters in beer.

The aroma in a beer may be formed from the malt and other fermentables, the strength and type of hops, the alcohol, esters, and various other aromatic components that can be contributed by the yeast strain, and other elements that may derive from the water and the brewing process.

The feel of a beer in the mouth, both from thickness of the liquid and from carbonation, may also be considered as part of a beer’s style. A more dextrinous beer feels thicker in the mouth. The level of carbonation (or nitrogen, in smooth beers) varies from one beer style to another. For some beers it may give the beer a thick and creamy feel, while for others it contributes a prickly sensation.

The strength of beer is a general term for the amount of alcohol present so the stronger the beer the more alcohol. It can be quantified either indirectly by measurement of specific gravity, or more directly by determining the overall percentage of alcohol in the beer. When you see the a term like a strong amber ale it will be one with more alcohol then a normal amber ale. I high enough amounts the alcohol can add a flavor component to the beer. Also in higher amounts you can feel the effects of the alcohol pretty quick.

The amount of alcohol in a beer is  often stated as percent of Alcohol by Volume or ABU. So a beer like HUB Bohemian Pilsner Lager with an %ABU of 5.1 is going have less alcohol per pint then one like Deshutes BBPXXV Imperial Porter with an %ABU of 11.

Archive of past news